Welcome To The Barns At Edgemont Inn

Our beautiful barn wedding venue and inn are situated in an historic region of New York state where verdant farmland surrounds a 19th Century industrial town.

The buildings that constitute the original Edgemont property — the Queen Anne mansion, the large livestock shelter and carriage house behind the mansion, and the smaller outbuildings directly behind the shelter — were constructed in 1900 by George D. Sherman, the son of George R. Sherman, the iron magnate and founder of the Witherbee, Sherman & Co. mining enterprise. The younger Mr. Sherman made a hobby of building large, beautiful houses in this style, for which he hired craftsmen who had been trained in Europe. Rumor has it that Edgemont was built to house one of Mr. Sherman’s mistresses, but the truth of this claim has not been established. 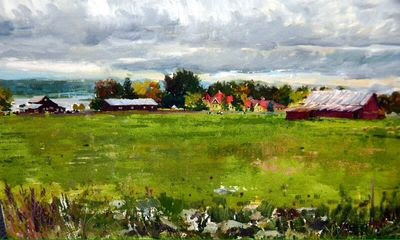 Whatever the original purpose of the buildings, they are undoubtedly a labor of love. Their beauty and uniqueness have inspired other artists, like the painter who created this charming view, Eduard Sangadzhiev. The property passed through several hands after Mr. Sherman sold it in 1906. For many of the subsequent years, it was a family home.

Like others before him, Vincent Dupont, the founder and owner of Edgemont Inn and The Barns, fell in love with the property when he saw it for the first time in 2012. Wishing to share his other great passion for the Adirondack region — and its opportunities for skiing, biking, hiking, boating and wildlife viewing — Vincent opened a small bed and breakfast in the home. That business has grown over the following years, while Vincent has divided his time between Port Henry and Brooklyn, New York.

Vincent looks forward to sharing his love for the area, the town and the property with you and your guests. Please ask for activity recommendations.

ASK US ANYTHING
Back to top